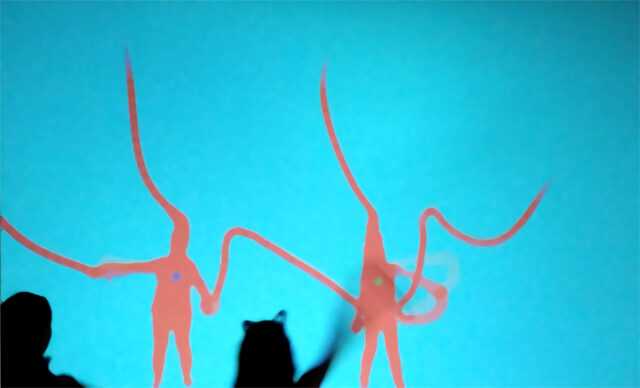 Fluid Connections is a body-based interactive installation that explores movement and interpersonal boundaries and connections. The body extends into space through extensions that are long, fluid and floating. Movement of the body creates ripples in these ephemeral extensions. When two strangers are each interacting with the piece, and then their fluid limbs cross paths, they unexpectedly bond together. The limbs combine, and the strangers are connected. Energy visibly pulses between the bodies. (People interacting with the piece have reported feeling something in their body when this connection happens.) There is an opportunity to explore inter-connectedness and a release from the mental boundaries and walls that separate us from each other.
Visit Marco Pinter’s website. 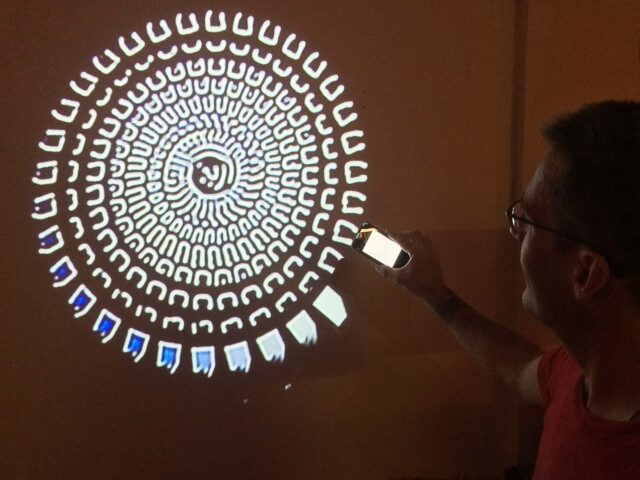 Life appears to emerge in patterns of pixels with Video Organism. These strange behaviors occur between a video camera and projector, without a computer. The artwork provides an active space for contemplation of, and interaction with, evolving optical dynamics. Artist Ethan Turpin states, “As members of the young human species, we affect and are affected by ancient natural systems in ongoing exchange… Often my process involves cameras and projectors as tools for gathering and sharing space/time content. Collaborating with scientists allows me to take part in imaginative yet empirically grounded conversations to reveal stories and patterns in data.” 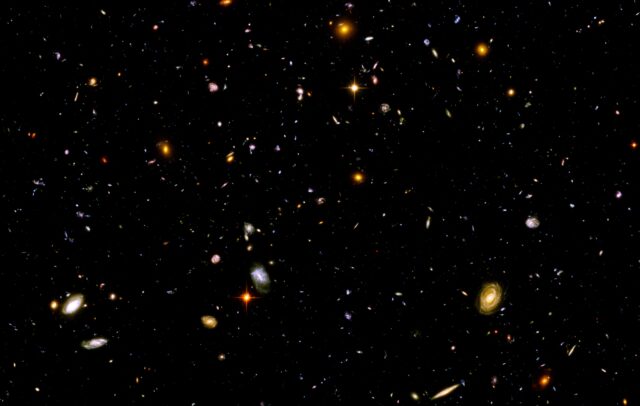 Celestial Inflections is an exploration of the universe with the viewer’s own body. The silhouette bends and warps space, swimming in distant galaxies. Approaching the camera causes one’s body to delve deeper and deeper into space and zoom into faraway star fields. The imagery in this artwork comes from the Hubble Space Telescope, and is a history book of galaxies in the universe. It combines thousands of separate Hubble pictures from over 16 years, and represents over 200,000 galaxies. The images were collected and mapped by NASA, ESA and researchers from many universities, and can now be experienced interactively through this artwork.
Visit Marco Pinter’s website. 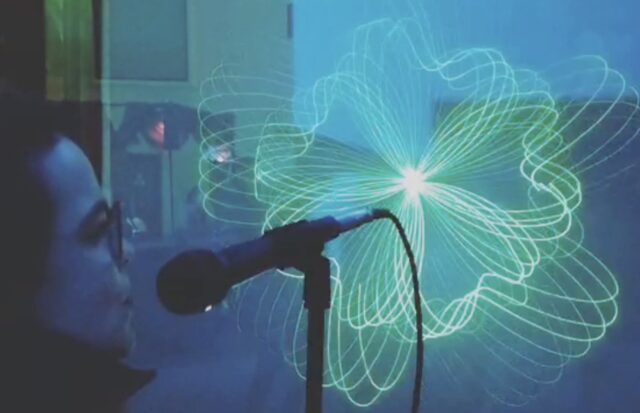 Sound can be visualized in a number of ways. Different forms of representation are typically used as analytical tools in the context of scientific inquiry. Oscilla is an audio-visual installation that allows the audience to interact with a waveform with their own voice through a microphone, and experience both the acoustic and visual results. The audience is encouraged by the visual feedback from the waveform and the audio feedback from the ring-modulation filter to produce more interesting results with their voice. With more experimenting, the audience can deduce certain patterns hidden in the algorithm of the visual pattern and gain control over them.
Visit the Xindi Kang’s website.
Visit the Rodney Duplessis’ website. 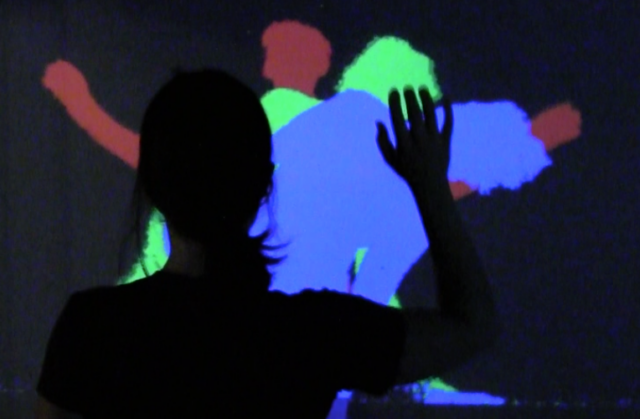 Time Dilation is an exploration of the body in time. Participants are able to have a conversation with echoes of their own body over time. The visitor is in control of an ensemble of three versions of themselves, spread out in time.  Additionally, the installation facilitates group explorations of movement, causality and effect.
Visit Marco Pinter’s website. 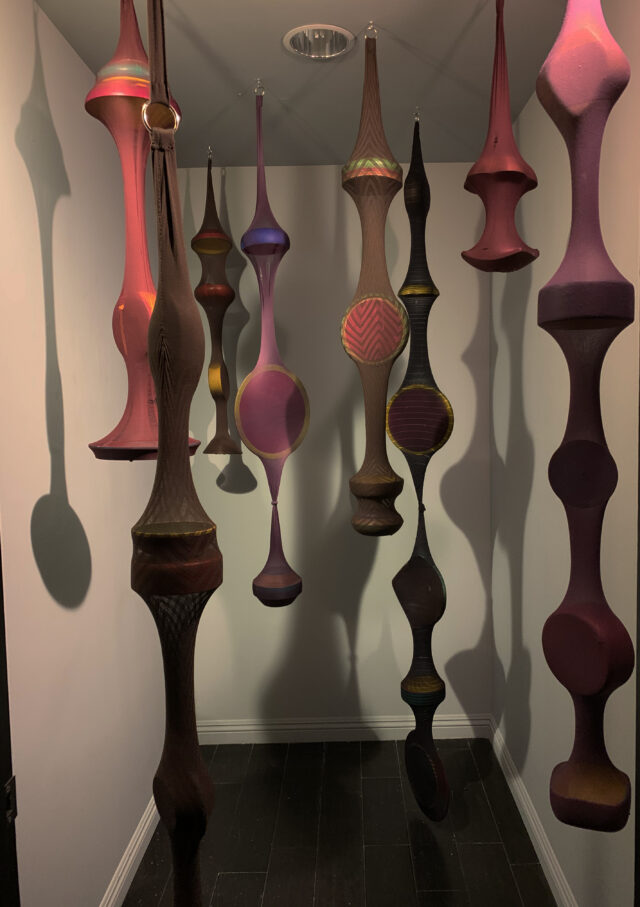 Elisa’s process involves collecting second hand clothing and fabrics, cutting them up or tearing them into strips, and then knotting and sewing them to create irregular and imperfect shapes. Her art explores themes of memory, transformation, adaptation, female identity and legacy. Through color sensations and symbolism, volume and heaviness, suspension and tension and through repeated hand gestures, she feels connected with the intimate female process of the handmade. 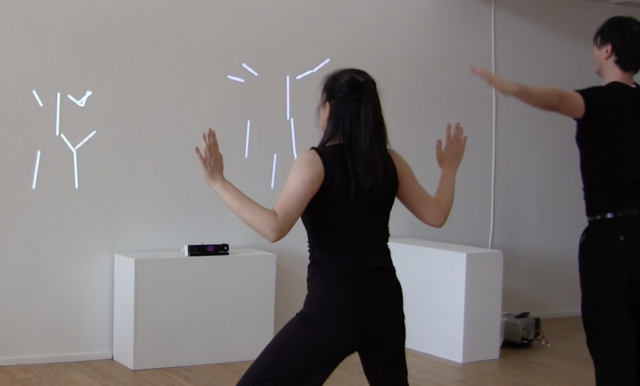 Unraveled in an exploration of embodiment and physical connection. Your moving body is reduced to individual, wispy lines – forearms, upper arms, spine, calf, etc. – then deconstructed.  You are mirrored by these lines, but your thigh may be above and to the left of your forearm, for example, each component slowly traveling relative to the others.  At other times, limbs extend and contract relative to each other. When a second participant enters, their limb-lines begin to merge and dance with your own, creating a single jumble of both bodies that blurs the threshold between self and other. 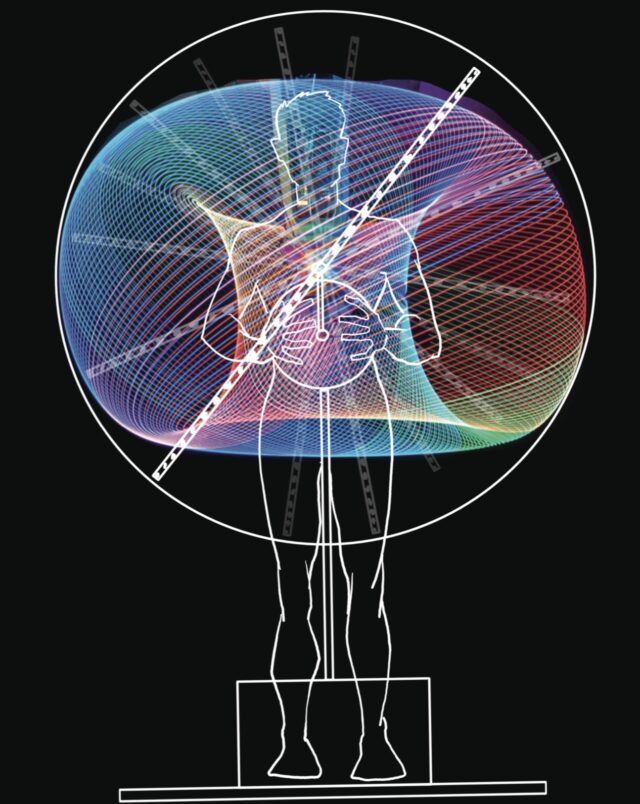 The HeartSpace is an artful immersive experience making visible the unseen energies of the human heart. 100,000 times a day your heart beats out an electromagnetic signature that is measurable eight to ten feet outside your body. This extended energetic field of your heart means that when you step into a crowded restaurant, a subway, a classroom, or simply walk down a busy street, the energies of your heart are interacting with people nearby in a very real and quantifiable way. Our heartspaces create the quite real yet invisible links to a chain intertwining a crowded room of strangers into a circuit of oneness. This artwork asks – would it make a difference if we could see the real energies of each others hearts? Would it change us to know that as I pass you on the street we are connected, even though we do not touch, by the space created as our hearts intersect for that brief instant. Could we hack reality just a little bit to demonstrate the very real energies we haven’t had the ability to visualize? If we could actually see the influence of our hearts, it might change every moment of our lives. 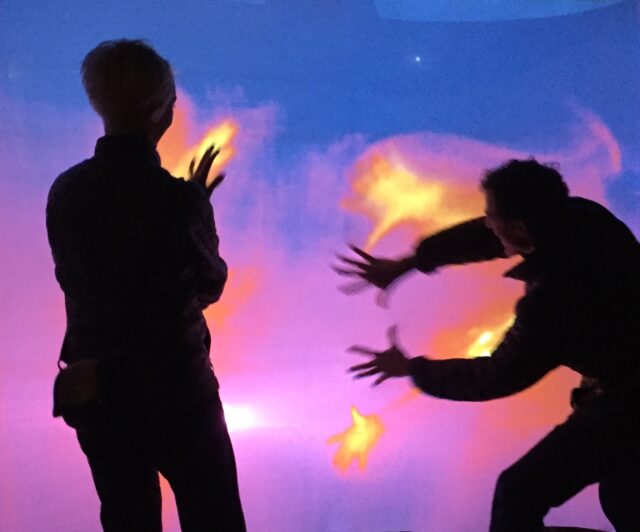 Thermal Gestures is an interactive artwork and a patented engineering invention. It explores our place in the environment, making visible the invisible. Scientifically, it explores the electromagnetic spectrum, thermal emission and heat absorption.  “… one of the things I find most compelling about the piece is that it teaches us about ourselves – the heat we generate, and the invisible trail/shadow we leave behind…if only temporarily. Your exhibit illustrates that we have an impact on our surroundings in ways we often don’t see. That’s a HUGE lesson, especially as we try to help people understand ideas such as climate change, where our actions have invisible byproducts that generate tangible effects.”
— Steve Hinkley, CEO Adventure Science Center (Nashville)
Visit Marco Pinter’s website. 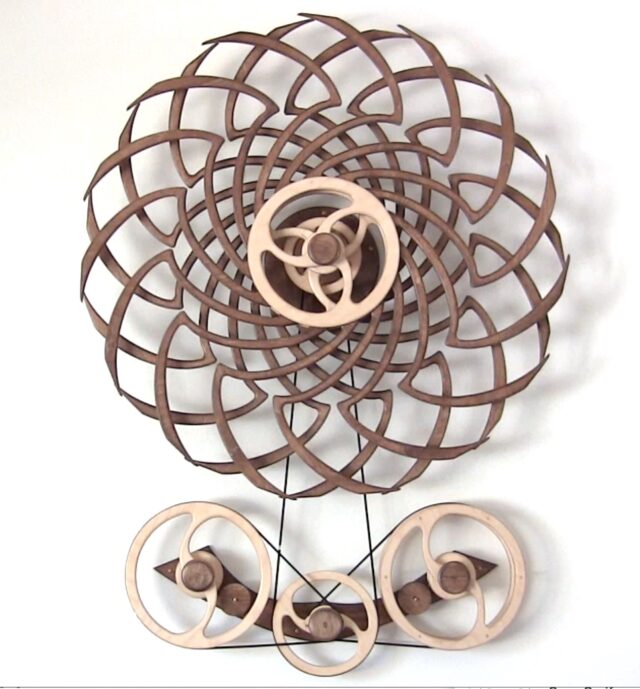 Mechanics and motion have always fascinated David C. Roy. During college he studied physics, engineering and chemistry to further his understanding of how things worked. This intuitive understanding of motion and mechanics combined with the artistic influences of his wife, Marji, led him to the creation of kinetic sculptures. Common elements in his work include motion and wood. All his current work is powered by constant force springs.
Visit David C Roy’s website. 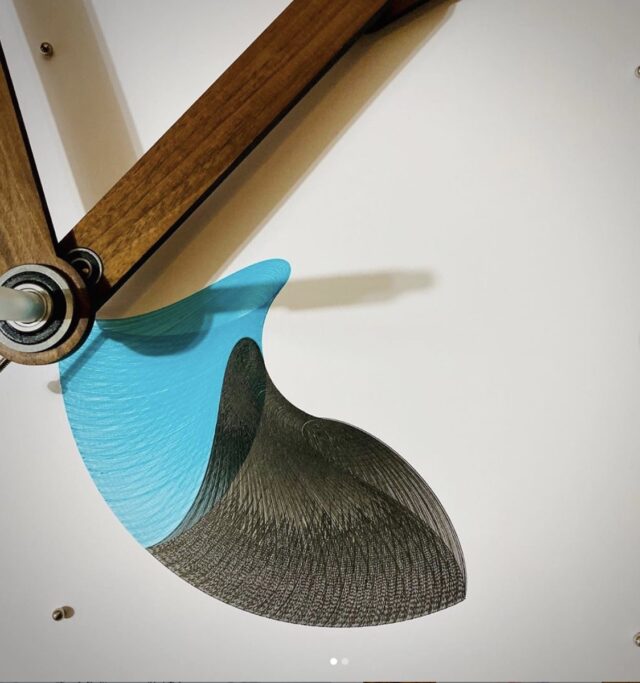 Each of O’Brien’s drawings is the product of one of his self-made drawing machines, called a Pintograph, where different motors work together, rotating at different speeds, to drive a single pen. The artist controls all of the motor settings, as well as when and where to start and stop a drawing. The result is an incredibly diverse range of possible outcomes–some chaotic and messy, some harmonious and mesmerizing. Drawings take anywhere from several minutes to many hours to draw, and all resultant drawings are capable of being mathematically derived. 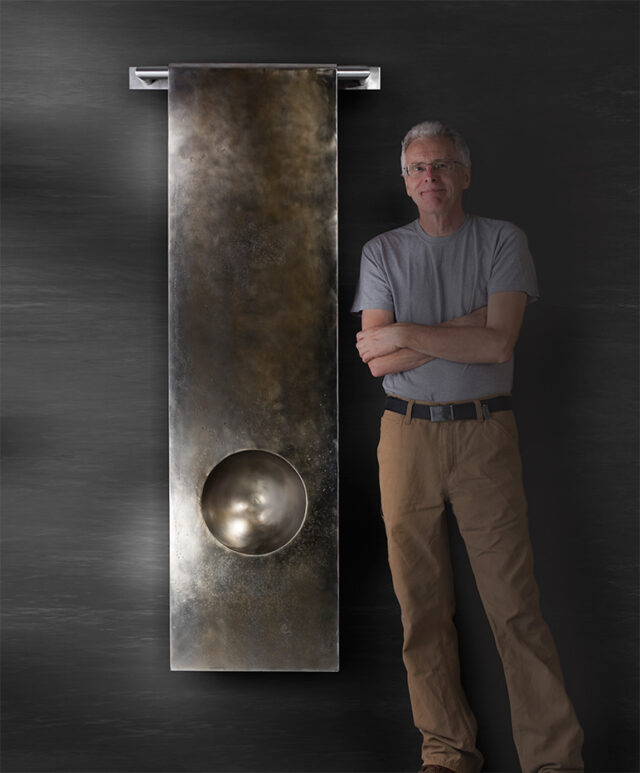 Douglas Lochner is an American artist working in a wide variety of mediums including forged glass, metal, stone, wood, ceramics, software and electronics. A minimalist, he strives to create joyous works that touch people on a primal level, conveying uplifting themes that circumvent the limitations of language, heritage and culture. 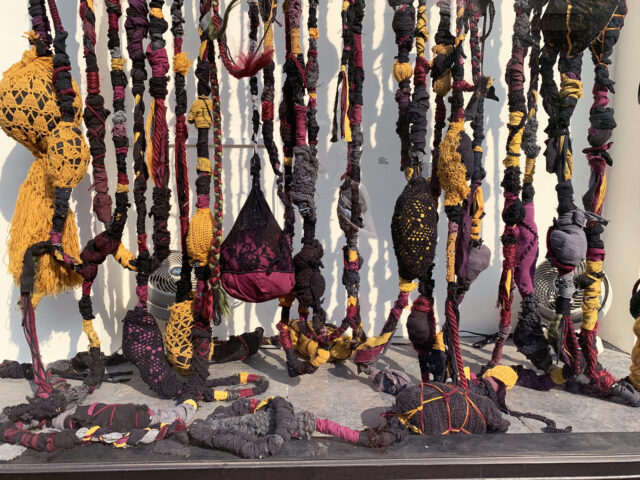 Soft Gravity – Elisa´s work explores three fundamental parts herself: her experience of being a woman; her feelings of acculturation from living in the US while maintaining her Spanish identity; and her opposition to consumerism and commitment to environmental sustainability. She addresses themes of memory, transformation, and identity through materials that have been discarded, deconstructed, and reconstructed, in a studio-based practice that revolves around experimentation while questioning our culture of consumption. She mixes the found and the made, the new and the old; tradition and experimentation, the mass-produced and the handmade; her Spanish values and her American experience, the present and the past.
Visit Elisa Ortega Montilla’s website. 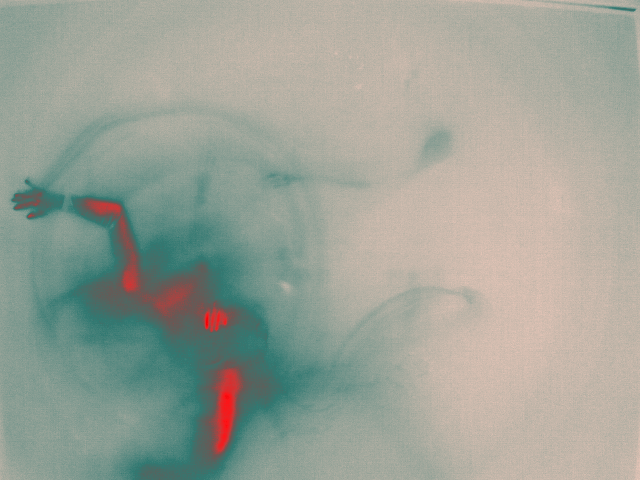 Much of Pinter’s work with dancers is an exploration of the ephemeral, impermanent nature of dance, and attempts to find areas of permanence through the use of choreographic sculpture or abstract visualizations created by dancers’ movements. The “Less Ephemeral” series employs a complex process where dancers move and press themselves against a thermally-sensitive surface, and are photographed by a high-end industrial thermal camera. The camera captures the residue of the movement over time, as the heat of the dancer’s body is applied and then slowly dissipates. These are then translated to the visual realm using a variety of thermal palettes, and create prints of the resulting images on scrolls, aluminum and acrylic, and are available in limited, numbered series.
Visit Marco Pinter’s website.